What Do Whitefish and Brains Have in Common? 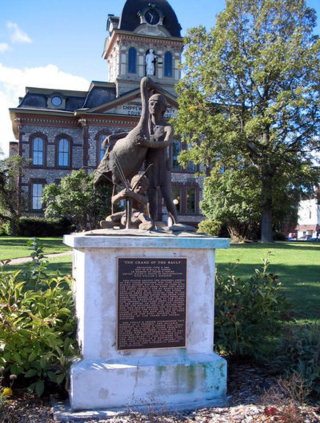 No bears. No moose. Not even any deer. I had hoped to see at least one such large animal during “the State Bar UP Tour” from Sept. 27 to Oct. 1, 2015. But we did see turkeys, an eagle, and an incredible rainbow (a pretty good consolation prize the night of the Blood Moon, which was covered by clouds).

I was joined on the UP Tour by:

Fred Herrmann, vice chair of the Representative Assembly and cheerful Sherpa of my 47 pound suitcase. The Comfort Inns in the UP don’t have elevators because they freeze in the winter, so Fred’s help was greatly appreciated; Victoria Radke, intrepid District A commissioner, backup navigator and local lore tale spinner; Gregory Conyers, the State Bar’s director of diversity who explained to members (while unsuccessfully trying between stops to remotely take delivery of a dishwasher) how our unconscious biases can cause us to miss out on great opportunities; and Candace Crowley, assistant Executive Director of the State Bar, subordinate only to our Suburban’s satellite navigation system’s U-Turn commands and badly behaved rear hatch (lucky to still have my 47 pound suitcase).

At each of our six widespread locations, I delivered a “State of the Bar address” and listened to what UP lawyers described as their biggest challenge. You may be surprised that it is not snow – they scoff at snow. All you have to know is this: When buying a house in the UP, do not worry about where the Christmas tree will go. Worry about where you will pile up the snow. Seriously – that’s what I was told.

UP lawyers are struggling with the demographics of their lawyer population: many experienced lawyers are retired or retiring and few young lawyers are there to repopulate the profession. Why not? No question the UP is God’s Country! It’s gorgeous up there! Every mile boasts beautiful vistas of the great lakes and acres of virgin land with waterfalls, streams, lakes and rivers running through it. (According to Radke, there are bears, moose and deer as well, we just didn’t see any). We didn’t even catch the color show and I would still describe the UP as nothing short of stunning. I did meet a few young lawyers, so I asked them why they chose to practice in the UP. To a person, they all said, “To be with our families who live up here.” All the lawyers I met were hard-working, sincere, gracious, humble and smart. Many were fascinating – in particular one lawyer from Escanaba who has seen more plays than Michigan has scored points in football this season.

Are you sick of the rat race? Maybe the UP is for you!  You would have your choice of architecturally striking historic courthouses in which to practice. (We visited as many as we could in order to leave Michigan Legal Help business cards and fliers). For example, if you practice in Crystal Falls, you may get to try a case in a huge courtroom with restored tangerine trim, intricate stenciling, and a giant bell tower overlooking the entire town and beyond. It was there that Judge Schwedler reminisced with us about his mentor, Oswald Casanova. Candace took a fancy to the unique name and researched him. Casanova received the Civic Recognition Award, which recognizes people in Crystal Falls and across Michigan who live their lives around the ten values that enhance the wellbeing of individuals, families and communities: compassion, courage, forgiveness, generosity, humility, inclusiveness, integrity, kindness, respect and service.

We also visited the Dickinson County Courthouse, which housed the last weight-and-pulley tower clock in the State of Michigan – it was converted to an electrical operation in the 1950’s. But perhaps the most interesting courthouse of all was in Chippewa County. While the structure itself was stately and awesome, the placard in the front yard of the courthouse is what caught our eye. And here is what it said:

“The Crane of the Sault”, Dedicated June 8, 1985, Gift of Stella B. Osborn, in Memory of Chase S. Osborn. This statue* depicts the Chippewa Legend of two young brothers who flee their wicked mother who is pursuing them with the intent to kill them. When they reach the north shore of the St. Mary’s Rapids [where the Soo locks are now located], they are met by a crane, who after hearing their story, carries them to the south shore of the Rapids. The crane then meets the mother on the north shore and agrees to transport her to the other side. Instead, the crane drops the mother in the Rapids. As she hits the stones below, the mother’s skull is cracked open and her brains become the white fish that inhabit the Rapids to this day. The crane adopts the boys and one of them remains in the area, marries the daughter of the crane and founds Bawating [the Rapids].

None of us selected whitefish at any meal for several days. But the point of the story is not to “gross you out.” Rather, it is to remind you that the Sault area is built on an ancient city with a rich and wonderful history and legendary. When I was out running one morning, just 2 blocks from our hotel,  I came upon the ancient Anishinaabek Burial Ground on a hill surrounded by a high fence and an ornate, padlocked gate with an upside crane at the top of its frame. According to oral history, Gchi-Manito (Creator) sent a bird to make its abode on the earth. This bird was a crane that circled the land and saw the abundance of whitefish. After coming to rest on a hill overlooking the Rapids, he called to the Anishinaabek with his far-sounding cry and soon a large village was congregated and the Crane became the Chief to the people. For as long as the Anishinaabek can remember, the hill has been used a sacred burial ground. Each year the Anishinaabeck come together to honor all those who passed to the Spirit world. Traditional burial markers bore the person’s clan symbol, but upside down, to signify they had passed to the spirit world – hence the upside down crane atop the gate.

In November, I will have the good fortune, distinct honor and privilege of attending the Michigan State Tribal Court Forum. I am so glad I was able to read about and see a few of the ancient communities during the UP Tour before the Forum. I met a tribal judge and a tribal prosecutor and hope to see them again soon. Meanwhile, thank you to all the UP lawyers as well as Ralph Cagel, President of the Wisconsin Bar Association and his staff, who met with us and made us feel incredibly welcome. I hope you enjoyed your time with us as much as we enjoyed our time with you!