Those of you who attended the State Bar of Michigan inaugural luncheon in October may remember the national anthem being sung by Alice McAllister Tillman, choir director at an Ann Arbor middle school and vocalist extraordinaire. Alice and her brothers, Maestro Willie J. McAllister Jr., Dewayne (vocals), Peter (percussion), and daughter Victoria (oboe) recently performed in their annual “Once Upon a December Eve” show at the Garden Theater on Woodward Avenue in Detroit. My family looks forward to attending this show every year and this year’s performance was, as always, amazing!

One of the songs Alice sang this year was “My Grown up Christmas List” by David Foster (composition) and Linda Thompson (lyrics) and sung by many, including Amy Grant, Kelly Clarkson and Natalie Cole. Some of the lyrics are:

So here's my lifelong wish

But for a world in need

That wars would never start

And time would heal all hearts

And everyone would have a friend

And right would always win

And love would never end

Alice’s incredible voice singing these lyrics was deeply moving and inspirational to me. As a matrimonial attorney, I have seen so many people whose lives are torn apart, whose hearts will never heal, who have no friends and feel no love or worse, hatred and disdain. They appear at the little round conference table in my office, across the mediation table, and in the courthouse. I don’t want to be too maudlin, here. In my experience, the majority of people exit the divorce process with a new lease on life, realizing their prior lives were not sustainable and the future holds great promise. They have excellent support systems, good co-parenting relationships with their former spouses and healthy relationships with their children. They blossom into people not focused on their own problems, but people helping others with theirs.

But there are some whose situations seem so pitiful: they have a poor relationship with their children, are incapable of picking up the pieces and moving on; have no family to speak of; and/or are financially destitute. As Alice belted out this heartfelt Christmas list, these are the people who came to mind and I couldn’t help but think their circumstances could have been helped by an attorney.

We can help our clients avoid ending up on Linda Thompson’s Christmas list by:

With these thoughts in mind, I would like to offer up my own Christmas list, one that is not as global as Linda Thompson’s, but rather, tailored to the practice of law. Here goes:

So here's my lawyer’s wish

But for clients in need

And wisdom heals all hearts

And everyone would have counsel

And right would be agreed

Through love that never ends

Go ahead, try singing it out loud. Here’s the link to Kelly Clarkson singing it. Trust me, you wouldn’t want to hear me sing it. Maybe some day, I’ll get Alice to record my version. (wink)

80-year History of Ann Arbor Leadership at the State Bar 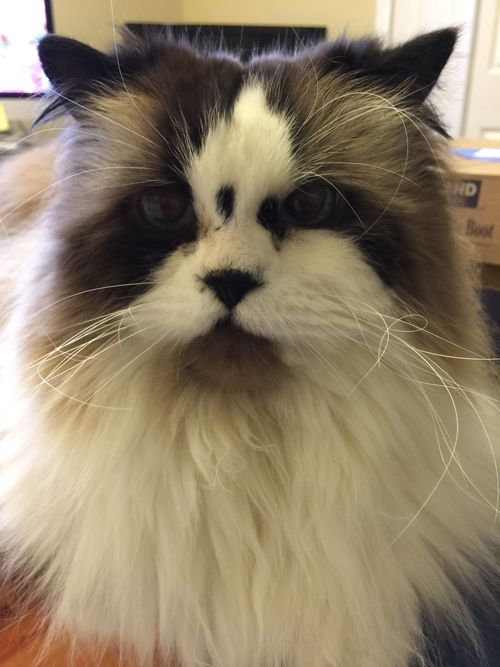 Until recently, I was under the mistaken impression I was the first State Bar of Michigan president to hail from Ann Arbor (pun intended). But Attorney Gregory Dodd informed me Roscoe O. Bonisteel of Ann Arbor was president in 1936. That tickled my fancy because Roscoe is a unique name and coincidentally, I have a cat named Roscoe (pictured at left). We adopted him when he was constructively evicted from his home by a Bouvier des Flandres.

At first, I thought to leave Mr. Dodd’s trivia at that, but the universe kept bringing Mr. Bonisteel to my attention. Following a wonderful performance of Beethoven sonatas by Paul Lewis at Hill Auditorium a few weeks ago, my husband and I walked through the large lobby on the mezzanine level and spotted a plaque with bronze letters: “Roscoe O. Bonisteel, Regent.” I stopped and stared at the plaque, my curiosity resurfacing.

About a week later, our freshman was home from the University of Michigan for Thanksgiving. He emptied his wallet of receipts: one of them was for a restaurant on Bonisteel Drive, which he said was on North Campus. I wondered what Mr. Bonisteel had done to merit a street being named after him: I don’t know of any other State Bar presidents with streets named after them.

There are 13 boxes of Mr. Bonisteel’s notes from his many endeavors in the University of Michigan Bentley Historical Library. Although I have not had an opportunity to delve through them, with a little help from unofficial State Bar historian, Carrie Sharlow, and the internet, I learned a great deal about Roscoe O. Bonisteel. It seems he was the first State Bar president to serve a full one-year term. His predecessor, Roberts P. Hudson of Sault Sainte Marie, served part of his term as leader of the Michigan Bar Association, our predecessor organization.

Mr. Bonisteel was indubitably a great man. I will never fill his shoes, but I am happy to stand on the shoulders of the legacy he left behind – a legacy remaining vibrant today. Here is his obituary, which explains his name on the plaque in Hill Auditorium and the street named after him on North Campus. 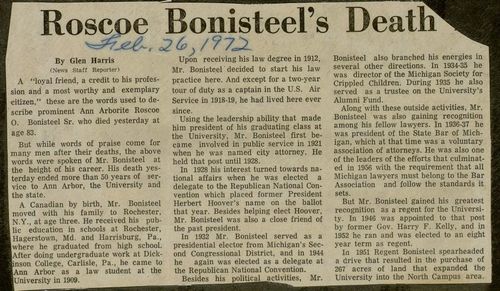 The family’s request for donations to the Interlochen Center for the Arts scholarship fund gave me another connection to Mr. Bonisteel: both Buiteweg boys attended band camp at Interlochen for five years running. I would bet there is a photograph or plaque commemorating Mr. Bonisteel at Interlochen, as well.

Mr. Bonisteel’s bar journal columns fascinated me because some issues facing the bar four generations after his presidency have changed significantly, while others remain much the same. 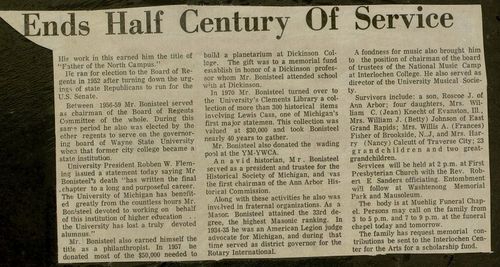 What has changed since Mr. Bonisteel was bar president in 1936?

Today, we can access Supreme Court opinions on-line the moment they are posted. http://courts.mi.gov/opinions_orders/Pages/default.aspx

Today, we have an equal number of men and women graduating from law school.

In August 2015, then State Bar President Thomas Rombach made a proclamation at an ABA meeting that gained national news coverage. Regarding the legal profession’s imperative need to partner with disruptive (commercial) innovators in the legal service industry, he said: “We can’t regulate our way out of this. If you don’t see the course of history changing our profession, then you’ll be in the dustbin along with the dinosaurs.” I agree with Tom: our mindset about commercialization of the profession must change or the profession will be extinct in short order.  In the end, however, I think this is largely semantic. What makes us a profession is our devotion to humanity and that will not change no matter how “commercialized” we become, particularly if lawyers remain organized toward that end.

Some things have changed little since Mr. Bonisteel was president in 1936:

Today, our state bar continues to improve the image of the profession in various ways, including our “A Lawyer Helps” website. http://www.michbar.org/alawyerhelps/home

Today, we are vigilant in protecting the 14 years of effort by Mr. Bonisteel and his predecessors to create our integrated bar. We carefully scrutinize policy issues on which we take positions to insure compliance with Constitutional law so we may continue to provide the best possible service to the public and profession.

Today, our 21st Century Task Force is again pondering the timing of licensure during the educational process, and internships.

Today, more than ever, our Supreme Court is looking to experts in the mental health profession to assist in specialty courts to maximize defendants’ chances for rehabilitation and minimize collateral consequences. #DrivingChange.